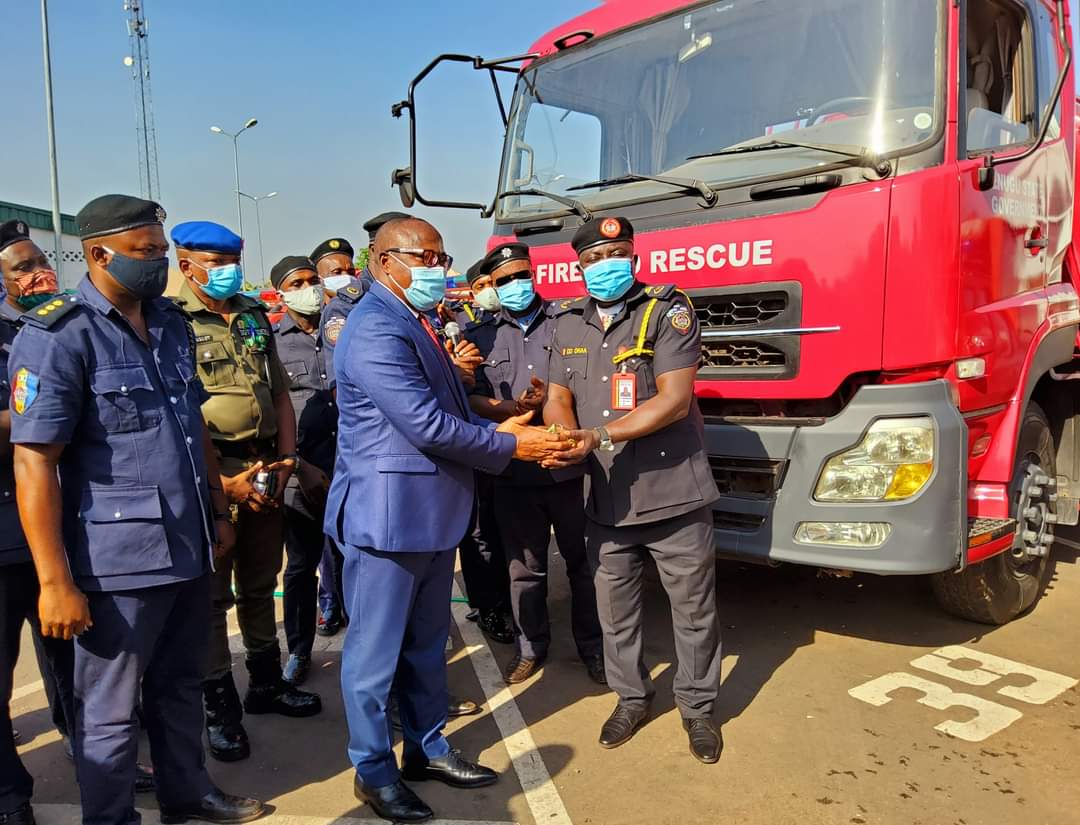 The administration of Governor Ifeanyi Ugwuanyi of Enugu State, on Tuesday, handed over four rapid response vehicles and a 12,000-liter capacity water tanker it newly purchased, to the State Fire Service, to aid operations of the fire-fighting agency in the state, especially this dry season.

Handing over the utility vehicles to the State Chief Fire Officer, Engr. Okwudiri Daniel Ohaa, on behalf of Governor Ifeanyi Ugwuanyi, the Secretary to the State Government (SSG), Prof. Simon Uchenna Ortuanya, disclosed that the state government procured the vehicles “to enhance the work of the Enugu State Fire Service”.

Prof. Ortuanya noted that Gov. Ugwuanyi’s administration, in recognition of the importance of an effective and efficient fire service in safeguarding lives and property, had earlier constructed five ultra modern fire service stations across the three senatorial districts of the state, after 56 years such life-saving infrastructure were built in the state.

The SSG added that the state government had also procured five IVM fire-fighting trucks for the five fire service stations, stressing that the newly procured rapid response vehicles and the water tanker handed over to the agency were timely in view of the harmattan season.

“It is therefore, to the glory of God and in the interest of our state and humanity that I, on behalf of His Excellency, the Governor of Enugu State, Rt. Hon. Dr. Ifeanyi Ugwuanyi, inaugurate these rapid response vehicles and also perform the formal hand over of these vehicles to the Enugu State Fire Service”, Prof. Ortuanya said.

Responding, the Chief Fire Officer, Engr. Ohaa expressed the agency’s deep appreciation to Gov. Ugwuanyi for “the type of attention His Excellency is paying to us to ensure that we discharge our duties effectively, professionally and efficiently”, saying: “There is never a time we received this type of support in the past”.

Engr. Ohaa who disclosed that the state government has approved the procurement of additional water tanker for the State Fire Service, promised the governor and the people of Enugu State that the fire-fighting agency will not disappoint them but “will do our best to make sure that lives and property of our people are protected”.

The Chief Fire Officer had earlier in the day led his team to Ogbete Main Market, Enugu and Timber Market in commencement of the scheduled public enlightenment campaign in the markets to sensitize traders on how to prevent fire outbreak during this dry season. A mini fire-fighting truck was stationed at Ogbete Main Market, Enugu, by the agency, Engr. Ohaa further disclosed.

Tue Dec 1 , 2020
Post Views: 17 The Economic and Financial Crimes Commission (EFCC), on Tuesday, secured the conviction of Edidiong Udokpoh. He was arraigned before Justice Achibong O. Achibong of the State High Court in Uyo, Akwa Ibom State, for stealing and converting the sum of N5million cooperative funds to personal use. The […]