The Nigeria police has written a letter to Afrobeat legend, Seun Kuti and the management to stop a proposed meeting about End SARS movement which is expected to hold today.

Seun Kuti is hosting a meeting tagged ‘#EndSARS movement; Lessons and tasks’ which is to hold on Tuesday, 17th November, 2020 by 12 noon at Afrikan Shrine, Lagos State.

But the Alausa Division of Nigeria Police said such a meeting should not hold especially at a time when the state is trying to stabilize threats to life and property caused by hoodlums during the End SARS protest.,

The letter reads: “I write under the corporate social responsibilities and your precedent support to Alausa police station about the mass meeting of a movement of the people tagged #EndSARS movement; Lessons and task which is to emerge on Tuesday, 17th November 2020 by 12 noon at Afrikan Shrine, Lagos State.

“I want to quickly recall your attention to the recent End SARS protest nationwide which was staged in the nation in the last five weeks and ended up being violent, causing multifarious destruction, looting and burning down of government and private properties within the borders of the state as well as causing deaths and injuries to both security agent and innocent law-abiding citizens.

READ ALSO  Jay-Z sells half his champagne brand to LVMH

“ It’s on this premise that I write that such a gathering or meeting planned to be hosted at your venue is not welcome at the perilous time when the security of the nation is trying to find her foot to stabilize all threat to life and properties.” 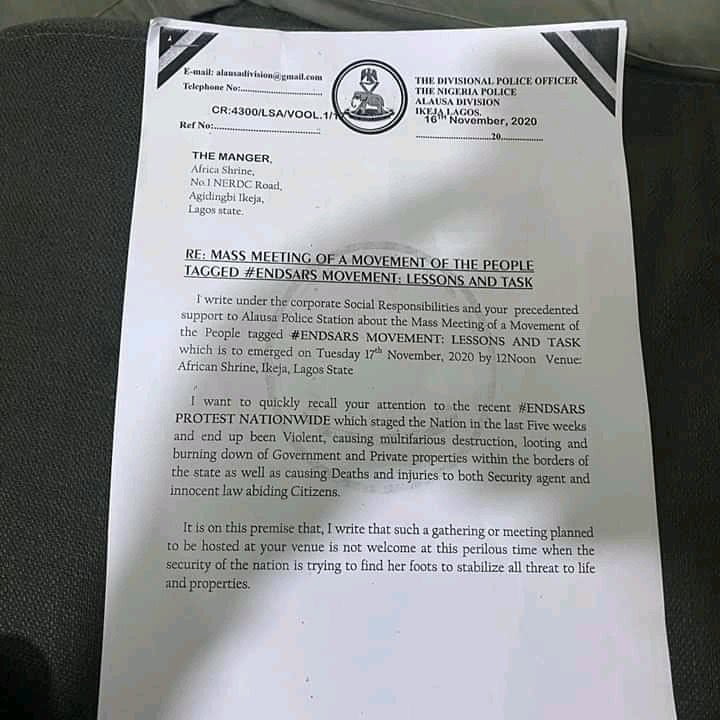 Tue Nov 17 , 2020
Post Views: 75 The Honourable member representing Itabono ward 1 in Ogbadibo Local Govt Area of Benue State, Hon. Patrick Ejeh, also known as Pataba has raised the alarm over an epidemic which broke out at Ankpa Owukpa, killing at least 9 people and leaving so many hospitalized. Ejeh in […]