Fast-rising Nigerian singer Omah Lay has taken to his social media account to cry out over his arrest in Uganda with his colleague, Tems.

Both singers were arrested in Uganda for flouting COVID-19 guidelines. They were arrested after their performances at The Big Brunch, which held at Speke Resort, Wavamunno Rd, Kampala, Uganda.

In a series of tweets posted by Omah Lay, he revealed that he was in cuffs. In his tweets, the singer stated that they had tried to secure their bail but all to no avail.

He wrote, “I’m in cuffs in Uganda right now with Tems. I’m just a singer trying to entertain, why am I being set up in Uganda? I didn’t organize a show, I came on stage and saw teeming fans and sang to them…Why am I being detained? Why am I not been given a right to a fair hearing? Why is Uganda not letting @NigeriaMFA step into this? They have been trying to secure our release to no avail. Is there something bigger at play in Uganda? Why do I have to take the fall for it???”

A Twitter user with the handle, @davidsancez256, further gave an insight into the matter. He posted on his account that the singers were being led to prison. His post was accompanied with pictured of Omah Lay in a handcuff.

See the photos below: 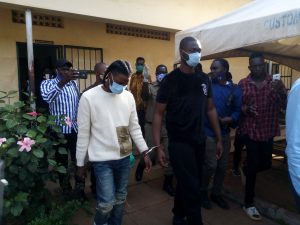 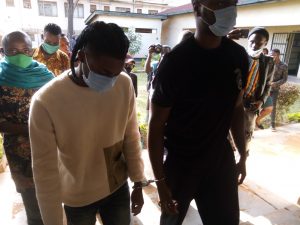 Mon Dec 14 , 2020
Post Views: 71 Rivers State Governor, Nyesom Wike, has said his criticism of the National Working Committee of Peoples Democratic Party should not be misunderstood to mean that there is an irredeemable crisis in the party. The governor maintained that since he “lacks the capacity to decamp to another political […]