Recall that Ndume, who is representing Borno South, stood as surety for Maina who is standing trial on alleged money laundering charges.

However, Maina has repeatedly failed to appear in court for the continuation of his trial which led to the revocation of his bail by Justice Okon Abang.

Abang also ordered a bench warrant for Maina’s arrest anywhere he is sighted.

Reacting to the development, Sowore, a former presidential candidate in the 2019 general elections, in a tweet via his Twitter handle, said that Ndume got himself into trouble when he started saying that there are ‘kleptocrats’ around President Muhammadu Buhari.

DAILY POST recalls that Ndume, while appearing on Channels Television’s Sunday Politics earlier this month, said the president is being betrayed by some ‘kleptocrats’ in his government who have refused to implement policies.

Sowore tweeted: “Sen Ali Ndume got himself into trouble when he started saying that there are kleptocrats around @MBuhari, forgetting that the regime is a kleptocracy! Now they have him by the balls! Even @MalamiSan who made it a habit to do pickups from Maina in Dubai wasn’t asked to explain.” 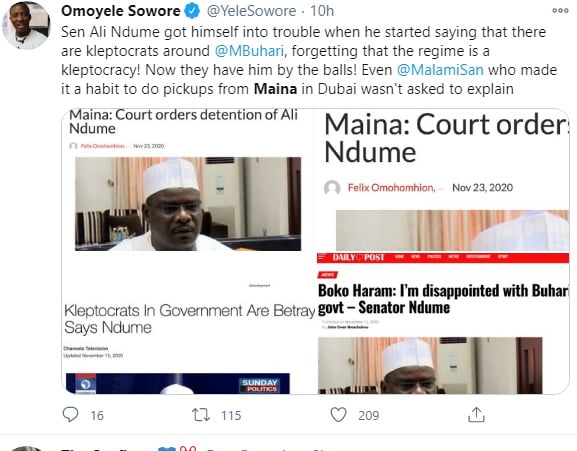 Mon Nov 23 , 2020
Post Views: 51 Senior pastor of Awaiting The Second Coming Of Christ Ministry, Adewale Giwa, says nothing has changed in Nigeria since president Muhammadu Buhari’s inauguration on May 29, 2015. Giwa specifically urged Nigerians to hold president Buhari and the All Progressives Congress responsible for causing austerity in the country. […]