Paul Okoye of the dysfunction Psquare has taken a swipe on Lola Omotayo over her birthday post appealing to him and his twin brother, Peter Okoye, to settle their differences.

DAILY POST had reported that Lola in a birthday message to the twins on Wednesday, urged Peter and Paul Okoye who went their separate ways following irreconcilable differences to settle their differences.

She further reminded them that they were brothers and above all would always remain so.

He further stated that she was two-faced, adding that they haven’t spoken to each other for 4 years but every 18th of November she comes out as usual to type a birthday message, making people not to know the ”evil things” she does behind the scene.

“At the age of 50, you still think you can be manipulative and always trying to be in control as usual.

“Well I’m not there anymore and Jude is equally not there as well which is exactly how you wanted it.

“Aunty, for four years, we haven’t spoken but every 18th of November you come out as usual to type sh*t.

“People end up thinking you are a good woman, not knowing the evil you do behind closed doors because you paint yourself to be the saint on the outside.

“Anyways, it’s social media era; what do I expect? Next year, you will come again to type sh*t.

“You also know me well, I don’t pretend, so continue with your evil ways,” he said. 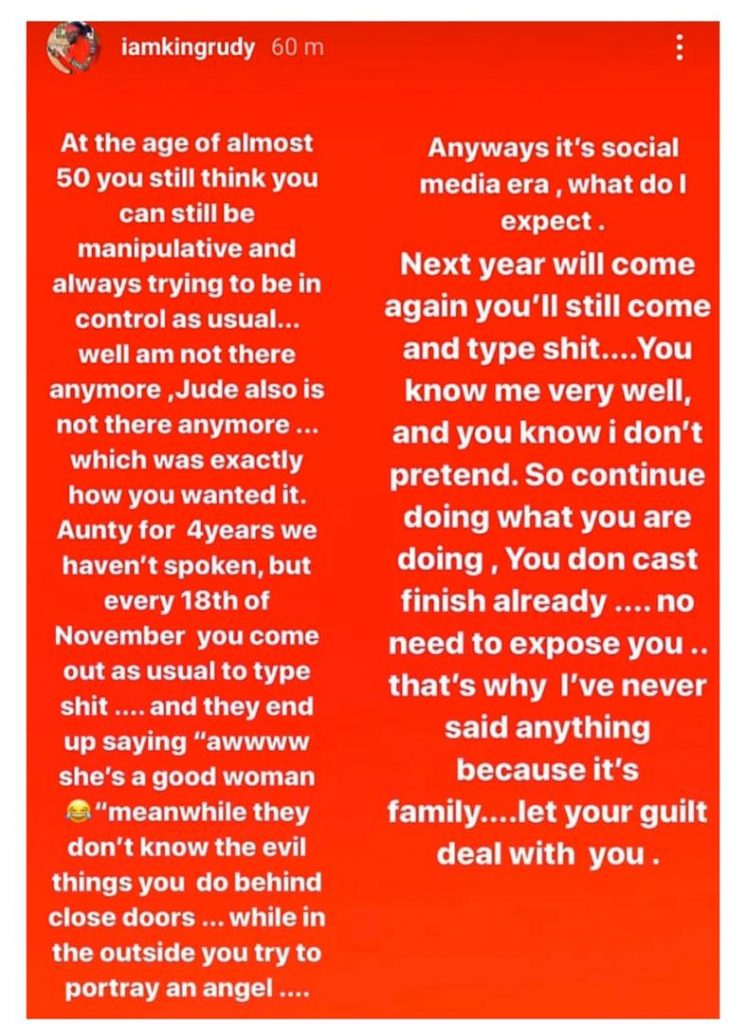 Thu Nov 19 , 2020
Post Views: 72 Manchester United are sweating on the fitness of first-choice centre-back pair Harry Maguire and Victor Lindelof, ahead of their Premier League clash against West Brom on Saturday, ESPN reports. Maguire completed 90 minutes for England against Iceland on Wednesday, but reported bruising to his foot afterwards and […]