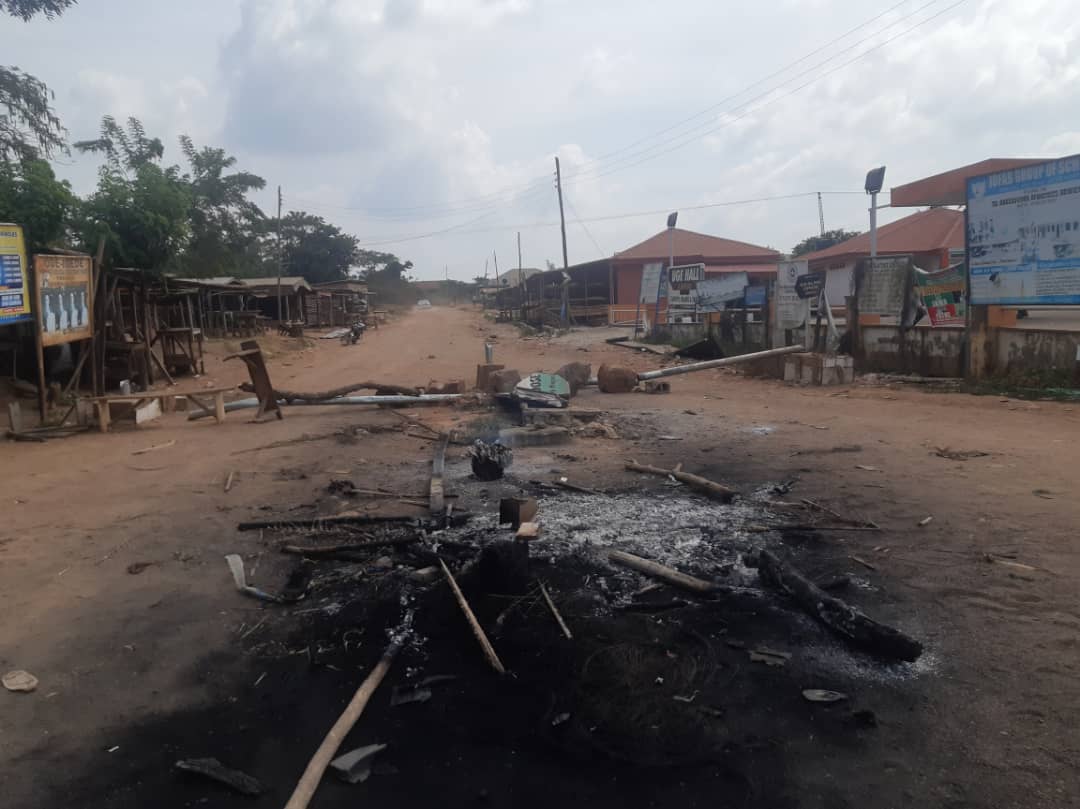 Fight was said to have erupted between the two neighbouring communities over the alleged insistence by the traditional ruler of Ude, Sunday Boboye that some parts of Isinigbo were part of his territory.

Following the resistance of the move by residents of Isinigbo, Boboye who is the Ajagun of Ude was said to have fled after his palace was invaded.

The palace was subsequently vandalized and razed during the fracas.

During a visit by journalists to the areas, roads leading to both communities were barricaded with bonfires as many shop owners had closed and ran for their lives.

With the socioeconomic activities of the town paralyzed due to the incident, some youths were sighted with dangerous weapons roaming the streets.

According to sources in the area, members of Isinigbo community trooped out in protest against the Ajagun of Ude for demolishing their houses including buildings belonging to non-indigenous who bought land many years ago.

Also, the Oluomon of Isinigbo, Oluwole Kareem, stated that they had to protest to stop continued demolition of their buildings by the Ajagun of Ude.

Oluwole said they were surprised when a case the Isinigbo community had won in 2012 was taken to another court by Boboye and judgment was secured, adding that they have existed on the land for the past 800 years.

When contacted, the Police Public Relations Officer in the state, PPRO, ASP Tee-Leo Ikoro said nobody was killed in the fracas.

Ikoro confirmed the burning of the Ajagun of Ude palace but said normalcy has been restored to the place with investigation already launched into the incident.

Thu Dec 3 , 2020
Post Views: 32 Manchester United midfielder, Fred, has broken his silence since he was sent off in the 3-1 defeat to Paris Saint-Germain in the Champions League on Wednesday night. The Red Devils fell to their second loss in the competition against the Ligue 1 champions. Neymar opened scoring in […]