Femi Fani-Kayode, a former Minister of Aviation, on Sunday, urged US President Donald Trump to stand firm to the very end.

Fani-Kayode said this while reacting to Trump’s claims that Joe Biden, candidate of the Democratic Party, won the November 3 US presidential election because the poll was rigged.

“He won because the Election was Rigged,” Trump tweeted.

However, reacting to the development, Fani-Kayode expressed confidence that Trump will prevail, insisting that millions all over the world are with him.

He tweeted: “Stand firm to the very end. We shall prevail. God said so and so it shall be. You are not alone Mr. President: millions all over the world are with you.

“We are all proud and strong Trumpians and we are also sons and daughters of the Living God. He will never let us be ashamed!” 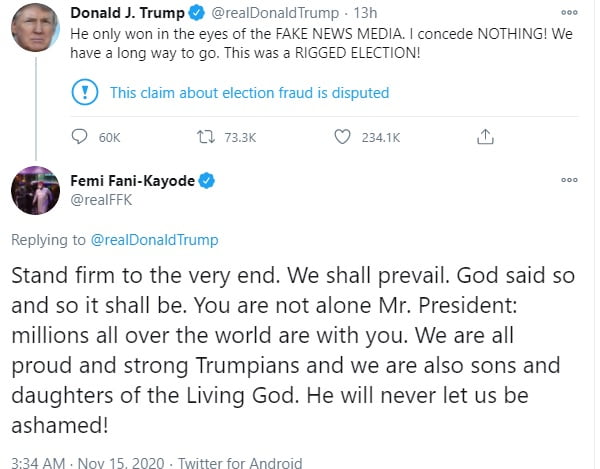 Sun Nov 15 , 2020
Post Views: 70 Apex Igbo youth socio-political organisation, Ohanaeze Ndigbo Youth Council, OYC, worldwide has claimed that three governors in the South East will lead a mass defection from the Peoples Democratic Party, PDP if the party fails to be open to zoning for the 2023 presidency. OYC said this […]